Poulomi Pavini Sharma is a lawyer, writer and a humanitarian, who is profoundly committed to the cause of Orphans in India. A Wharton School alumnus, she also takes immense interest in researching economic theories and is a keen follower of court proceeding in the areas of policy formulation and judicial activism.

She often finds herself gravitating towards writing, reading and traveling when she rarely finds times apart from social causes, which take the better of her.

Her passion for uplifting the undermined, humans and animals alike, amplified her resolve to take causes, one at a time, and back them up with concrete steps. Her quest towards an equal and harmonious society led her to research and co-author the book “Weakest on Earth- Orphans in India”, describing the stigma of Orphans in the country. This book is an ambitious attempt at identifying the system loopholes and government negligence towards the plight of orphaned, desiccated, and street children in India.

The book took shape after she strenuously researched, contacted relevant Government authorities, comprehended available UNICEF data & details, and traveled to orphanages pan India. Her intensive research and hard work led her to some shocking and stigmatizing details around the treatment of 20 million orphans in India meted with no justice for decades. This further strengthened her resolve.

An avid fighter by nature, she didn’t stall her efforts at the book and in 2015, elevated her endeavors by petitioning all-state governments and the Supreme Court to bring about a paradigm shift in the life of these children. She was lauded and featured in various publications and news channels alike for her exemplary devotion and a strenuous will to challenge injustice thereby championing her cause.

Poulomi’s belief in a fair society that propagates equally opportunity and protection to the weak, voiceless, and misfortunate children of the State furthered with time and turned into a movement that involved everyone around her. Post her engagement with the cause, various state governments are steadily realizing their role as a parent to these orphans and are contributing towards a sustainable solution. Her determination has translated into exemplary contribution, although, the mammoth in the room will only be addressed with the positive verdict from the Supreme Court towards the PIL filed by her, that can end this misery by offering a permanent solution. She motivates those around her and exudes a hope of attaining a society that actively participates and voices its concern towards the critically needed social and political reforms to bring about transparent changes in the labyrinth of a democratic structure and pave way for a future that is inclusive and unprejudiced. 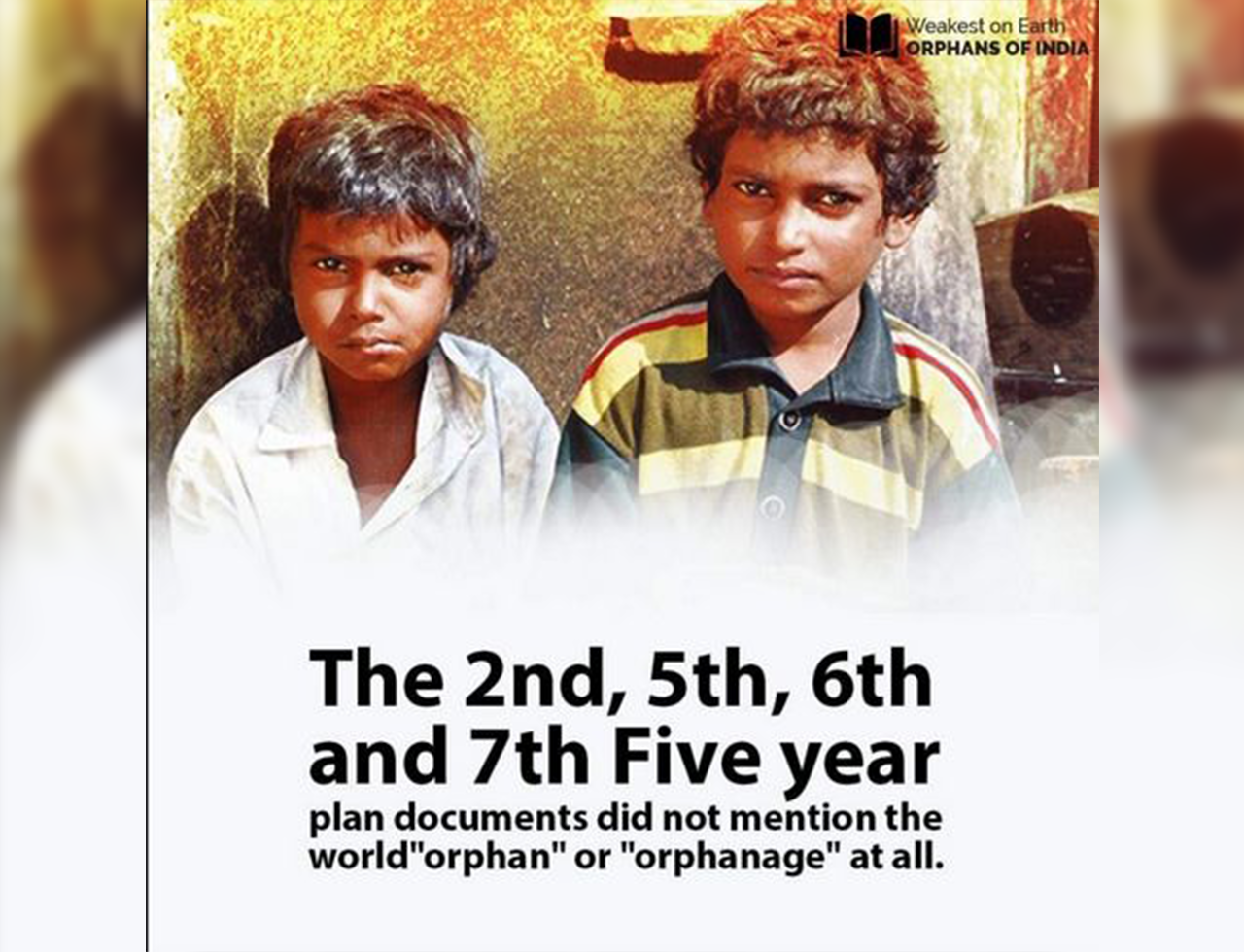 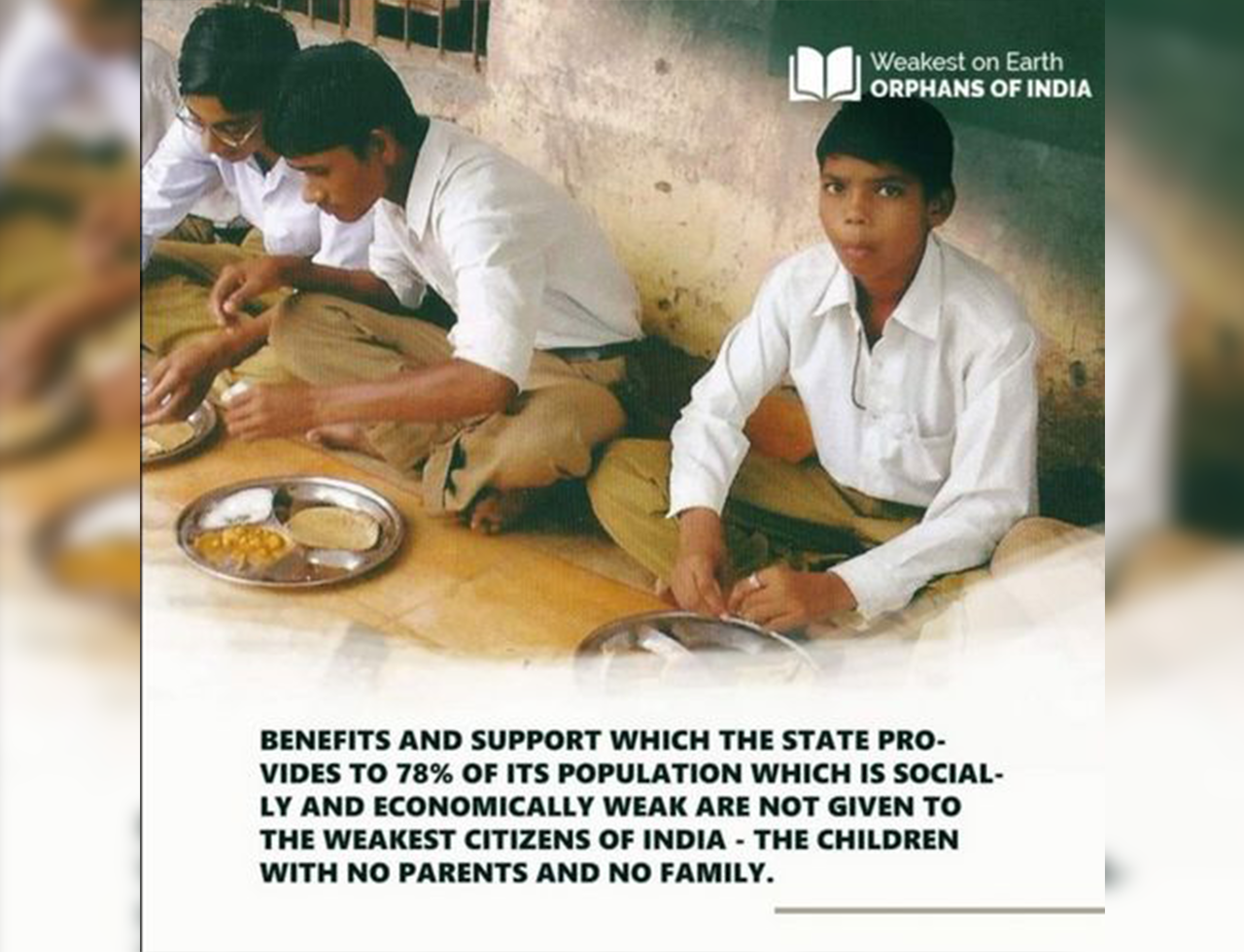 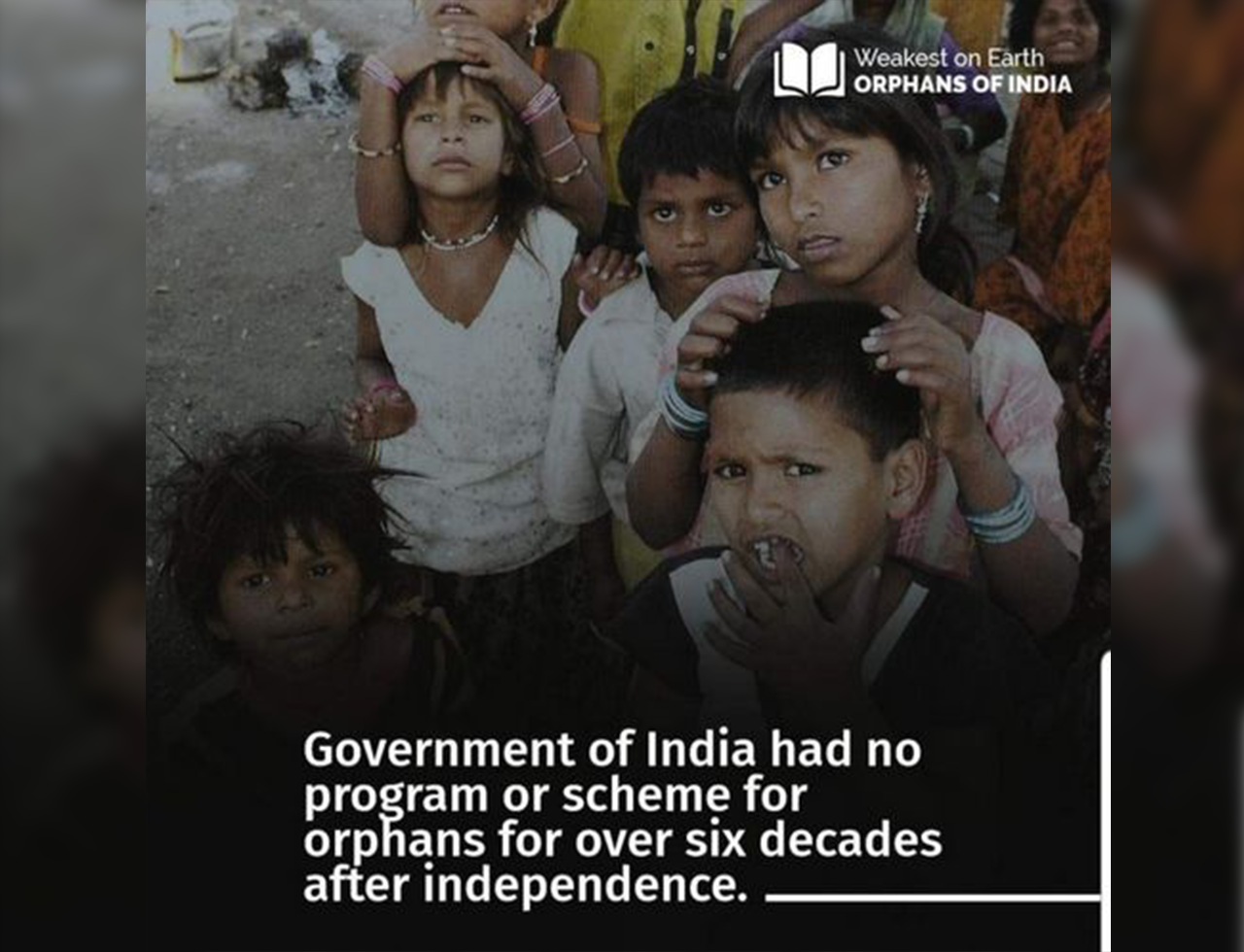 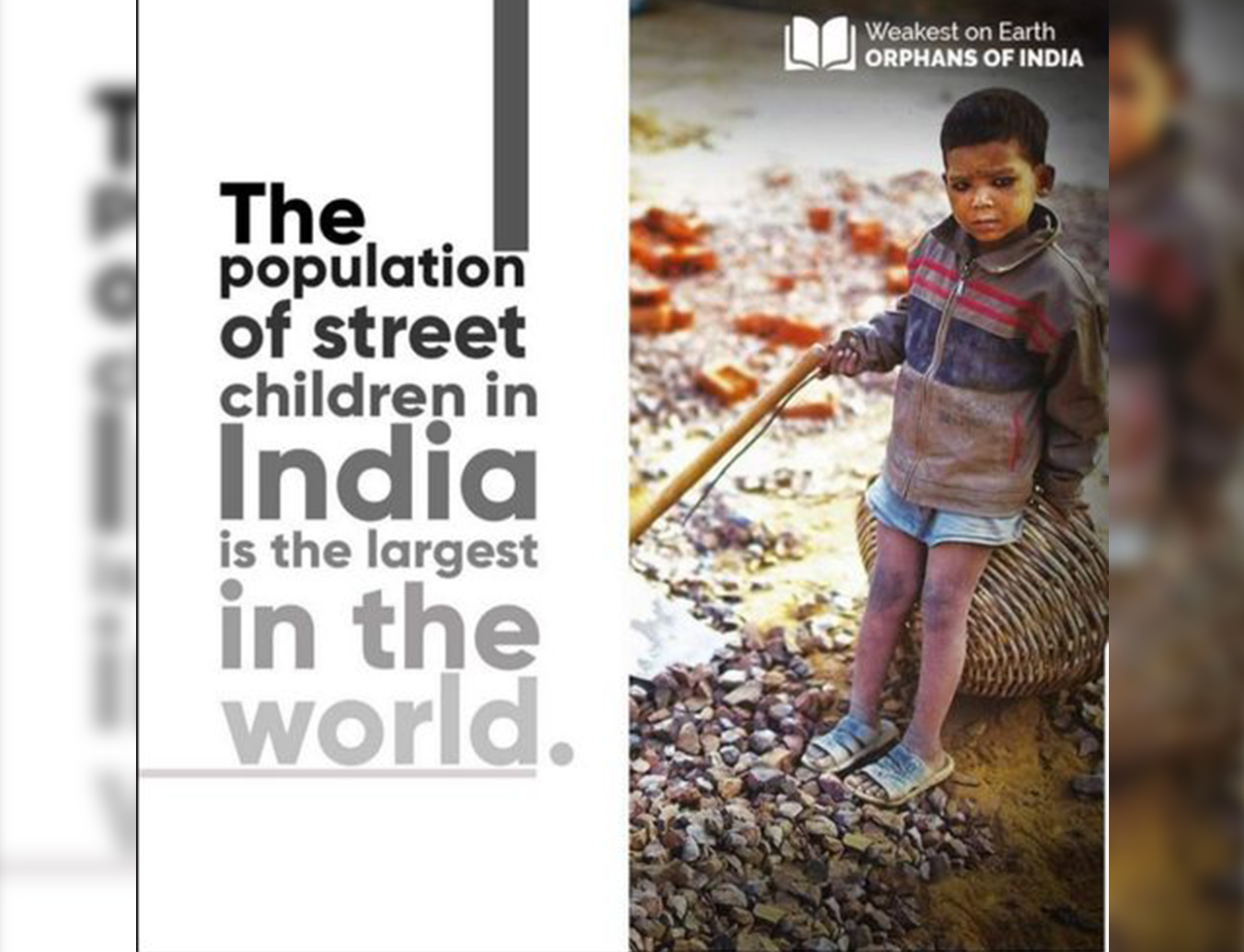 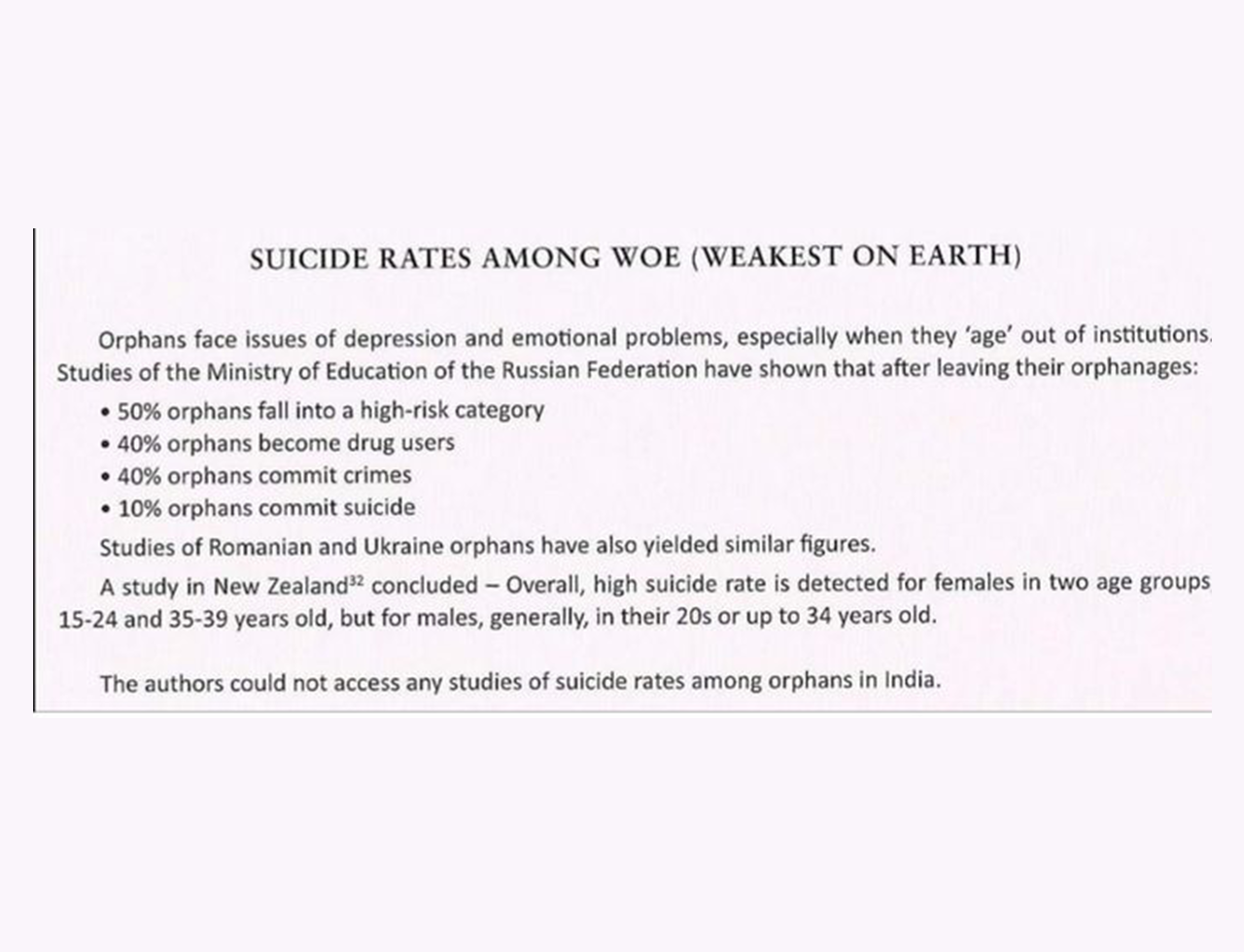 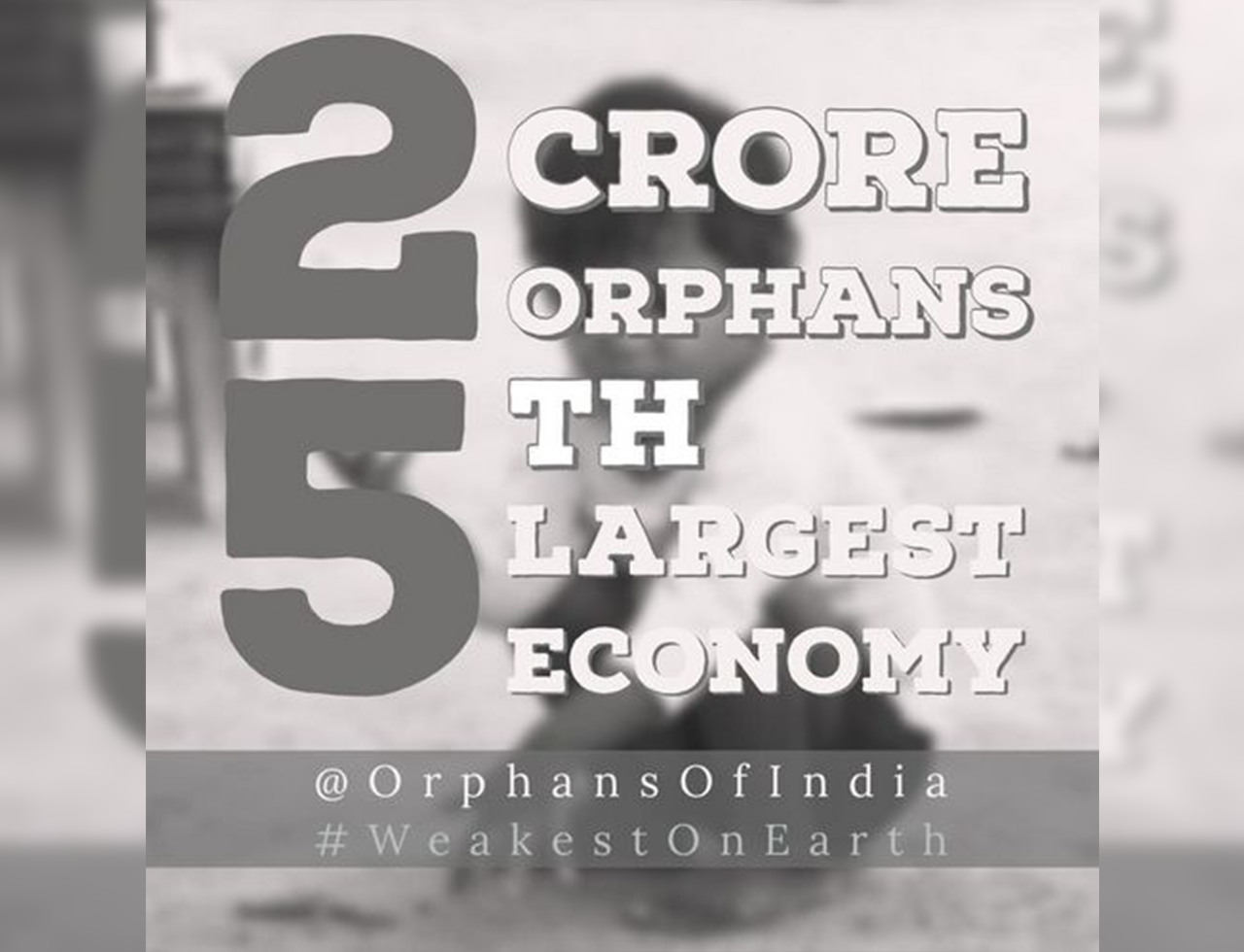 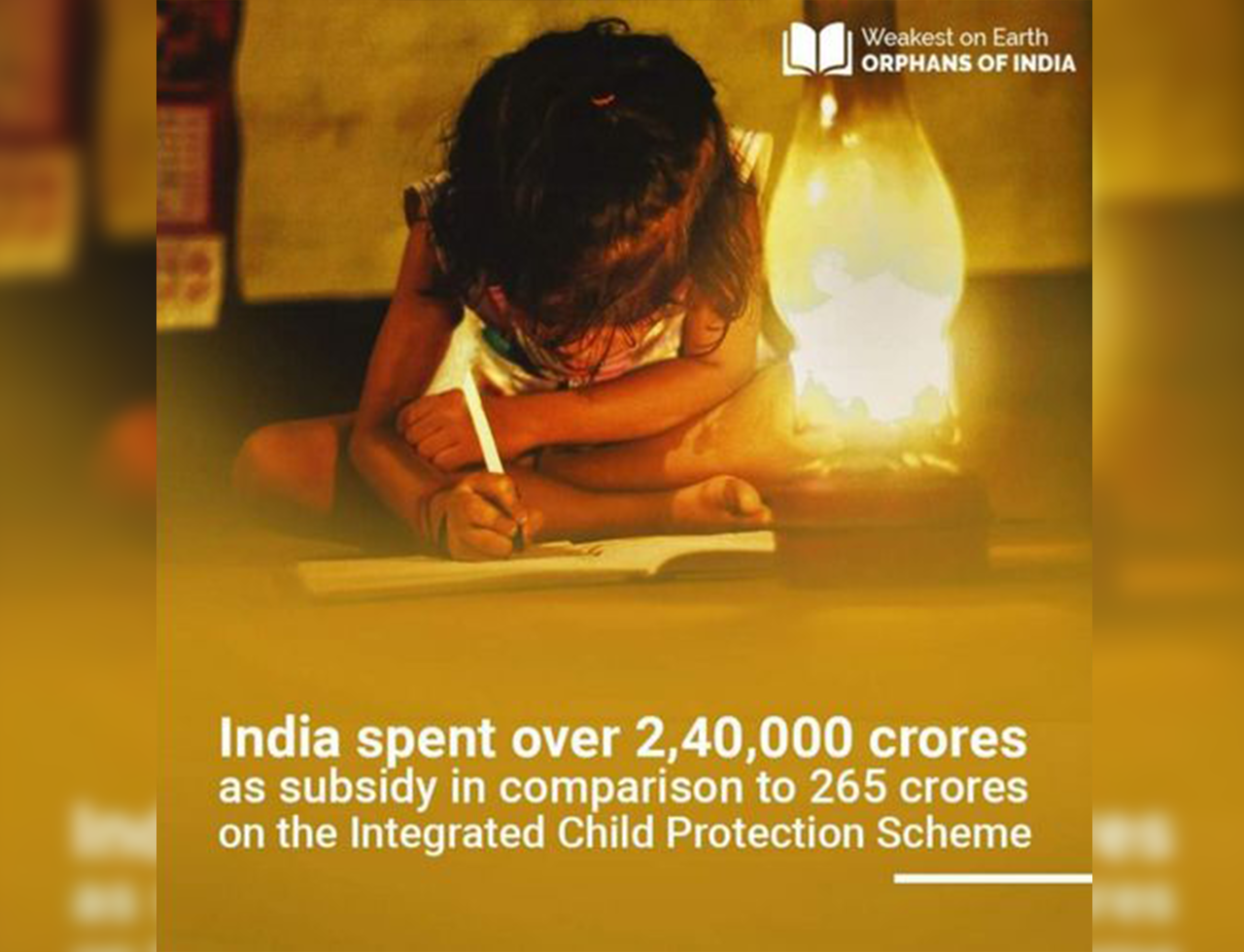 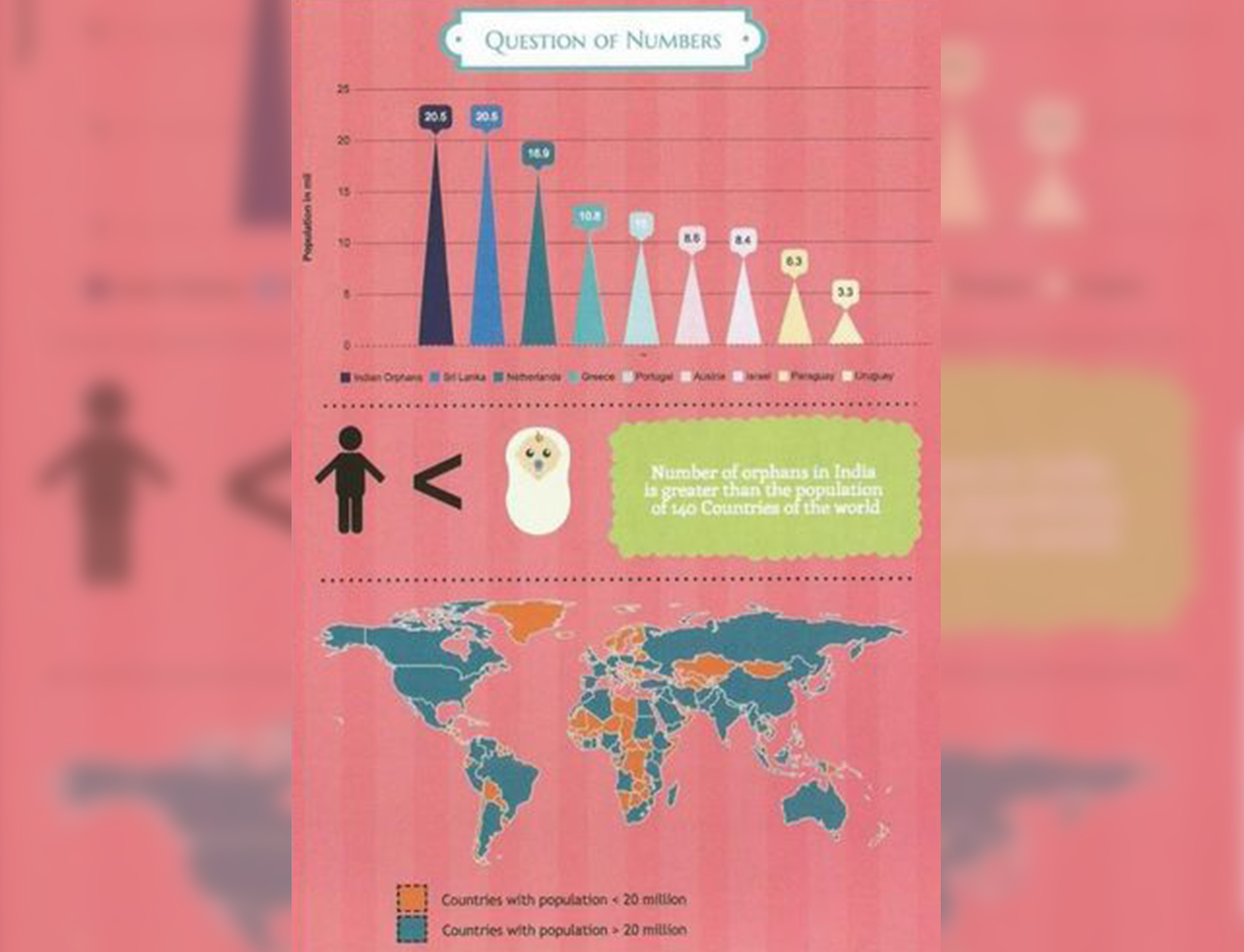 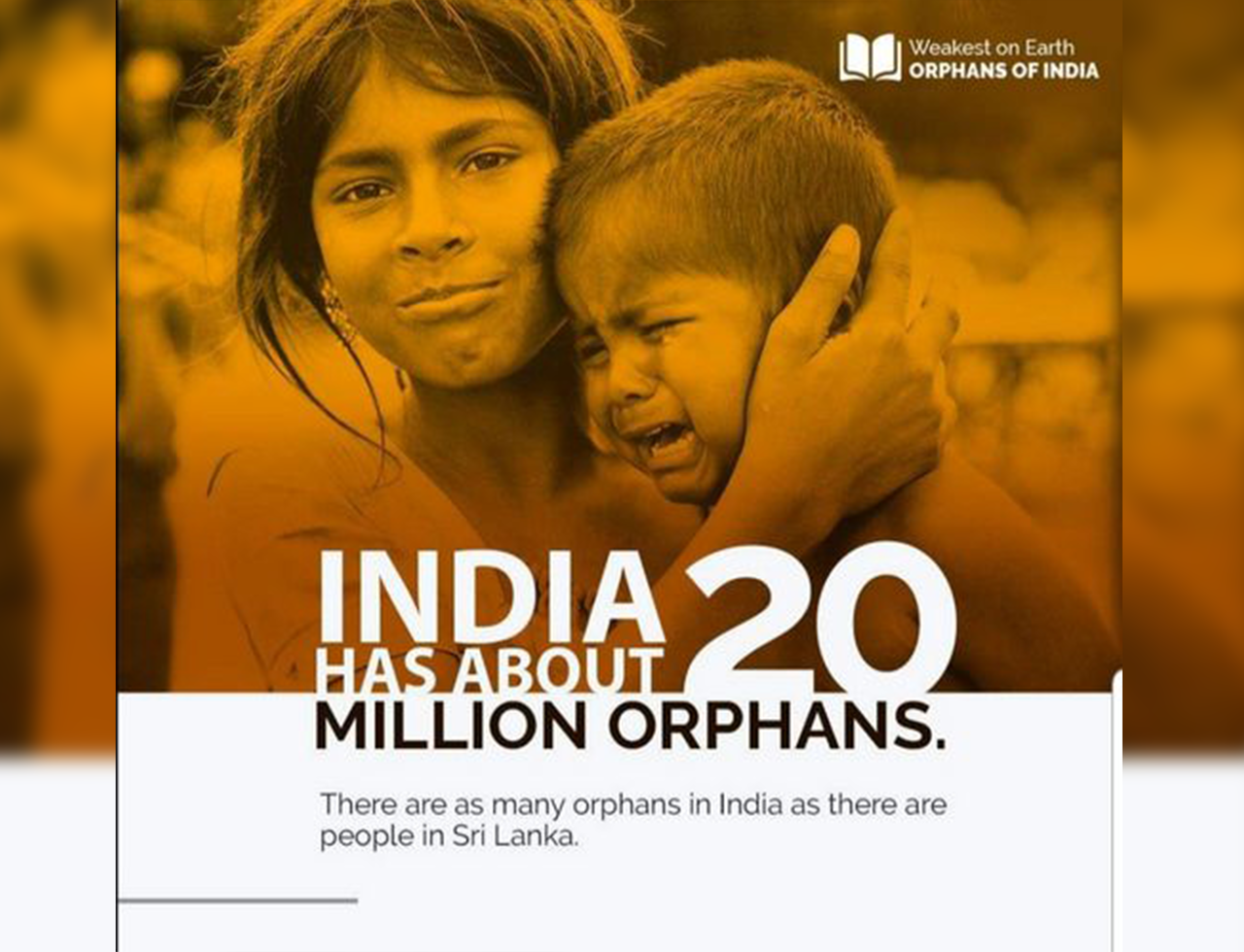 The government spends over 10,000 crore in subsidies and scholarship for other children considered weak, like backward classes and minorities, but for orphans it spends 0 rs.

Orphans have no options for higher education and no support

The total government budget for orphans is less than 2 rs, per child, per day. This is for food, clothes, medicine, education and everything else.

There has never even been a survey of the number of orphans in our country.

78 percent of the population has got reservation. Orphans have not. 
SYNOPSIS OF THE BOOK
WEAKEST ON EARTH – ORPHANS OF INDIA

Every animal comes into this world as the weakest amongst its kind. Of all the newborn, who soon learn to survive, the human child who takes over a year to learn to feed itself and over a decade to fend for itself is the most fragile.

A human child has to be cared for if he is to live and God has given this task to “parents”.

This book covers children whose parents are not there - unknown, absent or not all there - “orphans” in a larger sense. These are the children for whom natural alternate caregivers like grandparents or relatives are also not there.

For such children the State has to provide nurturing if the child has to have a Right to Live.

In India, now fast becoming a superpower, the State has essentially failed to provide this nurturing to its poorest, youngest abandoned citizens – the weakest on Earth.

This book presents facts and discusses what the Government of India has been doing and is doing for orphans and disadvantaged categories like street children.

India has about 20 million (2 crore) orphans. There are more orphans in India than there are people in Sri Lanka or in over 130 countries of the world.

India had no program or scheme for orphans for over six decades after independence. The 2nd, 5th, 6th, 7th 5-year Plan Documents did not mention the word “orphan” or “orphanage” at all.

After more than six decades the Central Government announced an Integrated Child Protection Scheme (ICPS) as a comprehensive program for disadvantaged children. This brought in many novel concepts and is continually evolving. It was introduced from 2009-2010 when Rupees 60 crores was allotted of which Rupees 42.23 crores was used.

The number of beneficiaries under ICPS was 91,000 in 2014-15 and 75,000 in 2012-13 and 2013-14. The limited reach of these figures in a country like India is self evident. This limited reach is the reason why no paradigm shift in the lives of orphans and destitute children has taken place.

The total allocation for ICPS, that is, for vulnerable children, in the Budget of 2015-16 is Rupees 409 crores. The earnings of a single Bollywood movie PK are over Rupees 600 crores.

For children of other disadvantaged categories like OBCs and SC/STs Government of India provides for scholarships, support for higher education, coaching for competitive examinations, reservation in jobs and in institutions including schools, seed money for starting businesses etc.

For abandoned, destitute, orphan children there is no support for higher education, no scholarships of any kind, no coaching for competitive examinations, no reservation in jobs and in any educational institution nor any kind of funds for entering business.

This book is the result of over a decade and a half association with orphans and a year of intense research of the system by two young authors. It brings out many glaring gaps in the support being extended by the State in India to those of its citizens who do not have a vote, do not have a voice and cannot draw any attention to themselves.

It analyses what is being done and submits that, with just a little bit more focus and resources, India can make a paradigm shift in the life of its over 2 crore weakest on Earth.

This book is essentially an appeal – a submission to the State of India to correct an injustice done, inadvertently, to its most vulnerable and least influential citizens.

A WRIT PETITION (PIL) SEEKING JUSTICE FOR 20 MILLION ‘WEAKEST’ INDIAN CITIZENS: ORPHANS AND CHILDREN IN NEED OF CARE AND PROTECTION

● India has more than 20 million orphans (2 crore) – 2% of the population and an additional number of over 10 million Street Children.
● There are more orphans in India than the population of Sri Lanka!
● Government of India has never had an official survey for the number of orphans! Such surveys are done in some of the most backward countries like Myanmar, Ethiopia and Indonesia.
● Govt’s flagship scheme for “Child Protection”: ICPS (Integrated Child Protection Scheme), is meant to take care of these 2 crore orphans. However, the coverage of this program is less than 1 lakh children per year in the whole of India since its inception!
Total budgetary allocation for “Child Protection” in 2018-19 is Rs 725 crore, which translates to less than Rs 1 per child per day! Meanwhile Government of India has pumped in over Rupees 23,000 crores to keep Air India afloat in the last 5 years
● 117 districts in India do not have a single orphanage!
● Various categories of benefits and support given to 70% of Indian children with parents who are of the OBC or SC/ST or Below-Poverty-Line categories – such as pre-Matric and post-Matric scholarships, admission in private schools under RTE Act, tuition and coaching for competitive exams and job interviews, seed money for self-employment, loans at concessional rates, credit for budding entrepreneurs and above all reservation in education and jobs are not given to orphans, who are weaker than any child who has parents.

● For orphans, who are just as weak, if not weaker than other disadvantaged children there are:
(A) No scholarships or fellowships
(B) No coaching for any examination
(C) No micro credit or loans on concessional rates
(D) No reservation in educational institutions and jobs.
(E) No provision of any kind for any ‘orphan’ to go for professional or higher studies after passing 10+2 at 18 years of age.

A 25-year old law graduate, Ms. Poulomi Pavini, has filed a PIL in the Supreme Court today, on 2 May 2018 seeking judicial intervention in ensuring Right to Life, Right to Education and Right to Equality to 2 crore ‘orphans’ and ‘Children in Need of Care and Protection’.

Ms. Poulomi Pavini has co-authored a book, titled “Weakest on Earth – Orphans of India”, which was published by Bloomsbury in November 2015. The book has been widely commended, including an endorsement by a former Judge of the Supreme Court, Justice V.S. Sirpurkar.

The Petitioner has visited over fifty orphanages in eight States and seen the plight of orphans in India. She has interacted extensively with a number of experts on the topic, along with officers and institutions of the Ministry of Women and Child Welfare, Government of India and six State Governments.

The PIL primarily seeks the following relief:
● ‘Reservation’ for ‘orphans’ – who are as deserving as any OBC or the third gender to whom the Supreme Court has recently extended this support.
● The same or more financial, educational and empowerment support be given to ‘orphans’ as what is given by Government to various categories of children who have parents.
● An official census or survey to have an official estimate of the extent of the ‘Children in Need of Care and Protection problem’ in India. ● Sh. Raghav Lakhanpal, Member of Parliament, mentioned the plight of orphans and Poulomi’s book in the Parliament, thereby starting a discussion on the subject.

● The National Commission for OBCs has recommended that orphan children may be considered part of OBCs for educational and job opportunities.

● Maharashtra has given 1 percent reservation in education

● Delhi has given orphan children special rights to education, and included them in RTE

● Chattisgarh has made major policy changes, including expanding the network of orphanages in all districts and allocating additional budget

● Punjab has extended the budget for orphan children

● Orphans have been given special provisions in government jobs in Himachal Pradesh.

● Telangana has provided reservaton in educaton and jobs for orphans as a part of OBCs. (Has included them in OBC category)

● Goa, through their Ladli Laxmi Scheme, financial assistance of Rs 1 lakh is also given to orphan girls.

● Bihar, with the Child Protection Management Information System (CPMIS), has started a drive to reunite families with lost or run-away children.

● Arranged a tie-up of orphanages with Department of Education, Government of U.P. for coaching and tuition of orphan students, specially at the Class 10 and 12 levels.

● Started “AAO - Adopt An Orphanage” program in Lucknow, her current hometown, in which

● Successfully arranged long-term associatoon of various orphanages of Lucknow with local entrepreneurs for providing vocational training and jobs for orphans, starting with 124 orphans in 2020. This programme is currently being expanded in seven cities in Uttar Pradesh and Haryana.

● Arranged Smart TVs for all of Lucknow’s orphanages during the COVID-19 lockdown, for uninterrupted online education of orphan children.

● Expansion of RTE Act to include orphan children, by combining schemes of two Departments of UP Government, for the entire state

● Arranged a campaign for nau-din, nau anaathalaya- for donations to girls orphanages on nav durge.

Commendation endorsements and letters by: